Managing Puppet manifests in source control is nothing new. Puppet Labs has their own suggested workflow that uses a git post-receive hook to automatically publish a git branch as an environment. It’s a clever idea, but not one that I think scales well with a bigger team. It would be better if manifests could go through code review, and be approved before going live.

This is the perfect use for Gerrit: any proposed changes go into a pending queue, and are only merged after a review process.

In the Puppet workflow with Gerrit, committers push their proposed changes to the pending change area for master, and then they go through review. Once approved, they are committed to master. When ready to move on to another environment, they can be promoted – by way of gerrit – by merging to development, then quality, then production for example. Life cycle management for your puppet modules.

The diagram below shows how it works: a developer gets an authoritative copy of the repo, and makes some changes, but instead of committing back to the authoritative branch, it is committed to a special staging area. The staged commit shows up in the Gerrit code review GUI. Members of the team review the code, and provide any relevant feedback. Once the code gets a +2 vote, it’s merged into the authoritative repo. 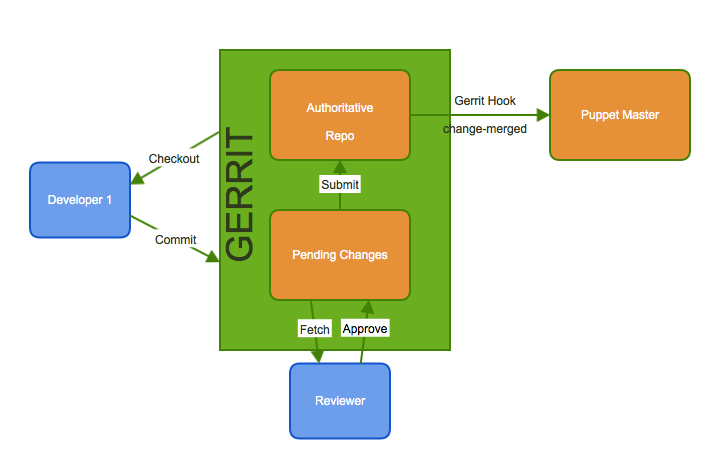 When a change is merged, the change-merged hook is executed. I’ve written one that will automatically publish the puppet environment. Unfortunately we need this separate hook, because gerrit does not look at anything in the .git/hooks directory.

Now, an interesting thing about gerrit is that all of the reviewers do not need to the human. Using the Gerrit Trigger for Jenkins, a staged commit can be tested, run through puppet-lint, or any other steps that are needed. The Jenkins wiki explains in more detail how it works. Basically, Jenkins can submit a vote back based on it’s results. Assuming the tests were successful, reviewer(s) can examine the proposed changes – and once the final approval is given, it’s deployed instantly to your puppetmaster.